Warning! The page you are trying to open is TOO BIG! to fit in your screen Please use device with bigger screen resolution .... 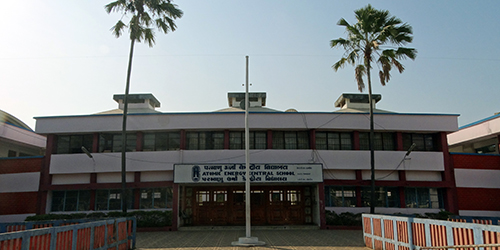 AECS Kakrapar strives to create a pupil-friendly ambience, so that the pupil can do the fullest justice to their native genius and innate potential. The first tentative steps by AECS Kakrapar in cause of education-the first streaks of Dawn are briefly retraced!

During the construction and setting up of NPCIL Kakrapar it was felt imperative to construct a school to cater to the educational need of the wards of NPCIL Employees.

AECS Kakrapar was established in the academic year 1983-84 to meet this objective. As the school building was under construction in the township, the school started functioning from Jhanda Chawk Building at Vyara, about 12 Km from the Township. These were the first fledgling steps of AECS Kakrapar. Mr. I. K. Bajajwas the first I/C Principal at that Time and Mr. C. R. Nagrajwas the First Chairman LMC.

Later it started functioning from Awaditchya Saurastra Brahmin Wadi at Vyara. The school functioned in a hall on the first floor of a building, which was divided into six class rooms by partitions. Due to the paucity of teachers, classes were initially held only for a couple of hours. With each passing year the strength of the school kept progressively increasingly. Ram Kabir Guest house at Vyara was hired to accommodate the Teachers. The school easily weathered the initial teething troubles and in the month of June, 1984 it was shifted to Anumala, the Township of KAPS Kakrapar. Classes were conducted in the B Type Quarters- each class having strength of about 25 students. The timing was 9:30 AM to 3:30 PM with a short Lunch Break. In 1985-86 the aspiration of the parent and children of the township was fulfilled when the magnificent school building, with class rooms and labs, was in inaugurated. Classes I to X was conducted; besides, WET classes Library and Games periods were also slotted into the time-table. The first batch of pupils appeared for the class X Board exams in 1986. Subsequently, classes XI and XII (With CBSE Affiliation) for the Science and Commerce Streams were also introduced from 1987 onwards. Mr. V. Y. Bhadkamkar was the Principal between 01.06.1986 to 25.06.1990.